Ganesha – The Remover of Obstacles 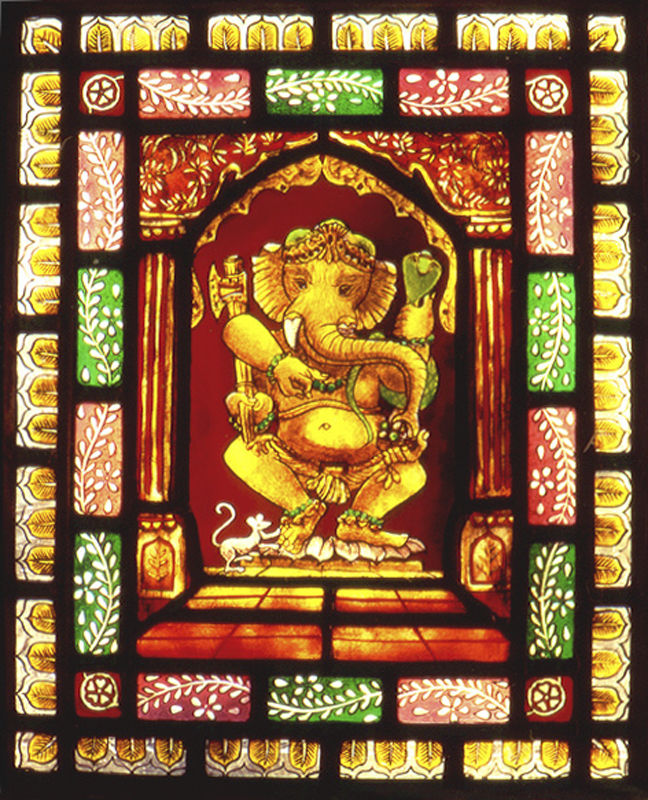 Ganesha Ganypati
As an artist I enjoy working with images from different religious traditions that often translate very well into glass. Ganesha Ganypati was a private commission. The central image is based on a figure taken from Hindu carvings in the Temple of Khajarahu, India. It is very well suited to the medium  of glass providing a range of  decorative detail and colour.

Ganesha is the Remover of Obstacles and the patron of all new beginnings. Ganesha Ganypati was based on Ganesha Dancing which derives from Indian temple art and the decorative details and features of a figure taken from carvings in the Temple of Khajarahu.

Ganesha has been represented with the head of an elephant since the early stages of his appearance in Indian art. Puranic myths provide many explanations for how he got his elephant head. One of his popular forms, Heramba-Ganapati, has five elephant heads, and other less-common variations in the number of heads are known. While some texts say that Ganesha was born with an elephant head, in most stories he acquires the head later. The most recurrent motif in these stories is that Ganesha was created by Parvati using clay to protect her and Shiva beheaded him when Ganesha came between Shiva and Parvati. Shiva then replaced Ganesha’s original head with that of an elephant. Details of the battle and where the replacement head came from vary according to different sources. Another story says that Ganesha was created directly by Shiva’s laughter. Because Shiva considered Ganesha too alluring, he gave him the head of an elephant and a protruding belly.