The central figurative image is a square through two panels that cuts across the mullion in the middle of the window. It depicts Mary and Joseph with the Christ Child leaving Egypt to return to Palestine after an angel tells Joseph in a dream that Herod is dead and it is safe to go home. There is a background of pyramids and camels to set the scene. Joseph is carrying Jesus and Mary is shown offering Him wild flowers. He has three flowers in his left hand to represent the Trinity – Mary has the fourth flower in her right hand representing her role through the incarnation of making a link for Christ with the material world – the earth’s four directions and dimensions are represented by four in sacred geometry

These flowers are anemone coronaria – the ‘Lily of the Field’ in Luke 12:27. A rich legendary history is associated with anemone. It is said that the anemone originated from the blood of Adonis, and even the Romans considered it valuable in preventing fever. Often anemone is applied to bruises and freckles. In Chinese symbolism, the anemone is equated with death.

There are bulrushes next to Joseph in the foreground as a reference to Moses and Jewish history in Egypt and anemones next to Mary and the donkey. The moon above Joseph and Jesus in the left hand panel represents Mary and there is a suggestion of dawn (night waning perhaps on the old world of pagan Egypt) behind Mary in the right hand panel. The six-pointed star in the right hand corner of the Virgin Mary panel is the Morning star (Venus) – but is also representative of Judaism and the link with the Old Testament (as well as a reference to the star in the east of Christ’s birth)

The flanking panels of the window are mirrored designs featuring 7 lilies and 7 gold stars on a rich blue background. Madonna lilies and stars are associated with the Virgin Mary. Seven is a number associated with the Feminine in many traditions and to Mary symbolically in her image as representing the perfected human soul. The four panels are linked by a running frieze top and bottom of red anemones and green leaves on a blue background. They are based on Goan/Portugese tile designs in recognition of the donor’s country of origin, Goa in India.

Materials used are antique, streaky and plain flash blue and with red on clear and red on green flash for the frieze flowers. Processes used were sand blasting, acid etching, stain, paint and enamel. This window was donated by Joseph Pereira in honour of his family and designed and painted by Delia Whitbread MA(RCA). Liz Daly designed the calligraphy for the text. Leading and Installation work was by Sharon Price and David Knowles respectively of Godstone Glass. The window can be seen by arrangement with the church on 0208 303 1957.

With thanks to Rev’d Nadim Nassir (The Trinity Institute for Christianity and Culture) and his sister Houda, Johana Rogers, Peri and Neil + Ayshe Orhan-Pennel, Vivien and Freddie Wheeler for inspiration as models. Also Larry the donkey at Hackney City Farm. 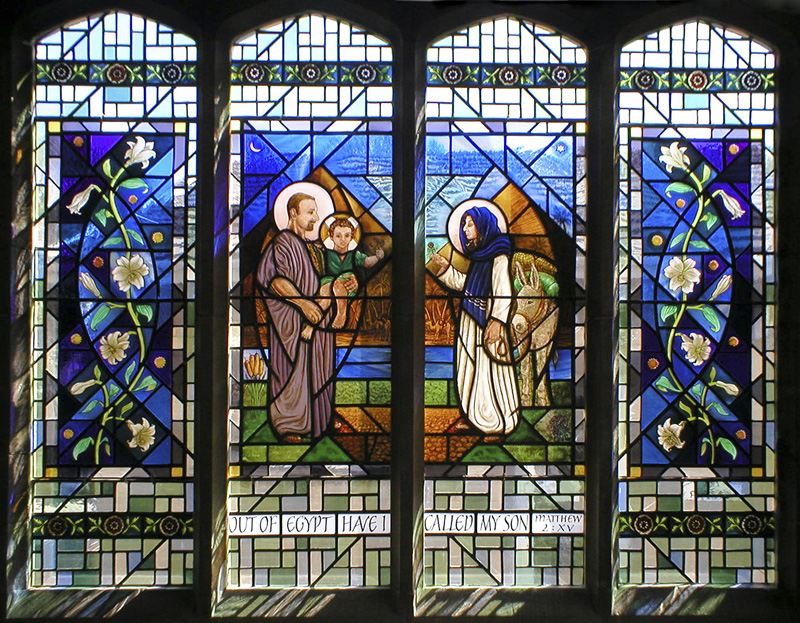