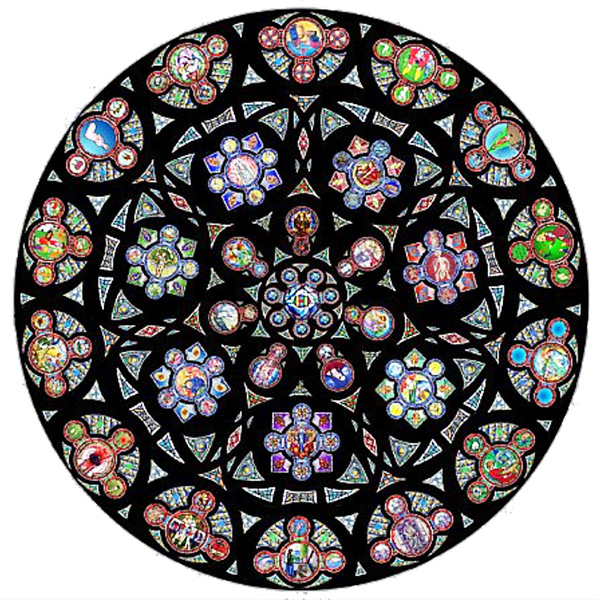 A research project developing on-line facilities for collaborative work in order to design a virtual rose window celebrating the Feminine.

The initial idea, and pattern, for the rose window began during Delia’s work in the Visual Islamic and Traditional Art at the Royal College of Art in 1989. The MA project was conceived as a celebration of the unsung heroism of women who labour worldwide for their families both as mothers and outside the home. Traditional female activities – such as pottery and weaving, embroidery and cookery, belong to the civilising work of women – medicine, education and industry all began in the kitchen.

In 2001 Delia began a Fine Art PhD in the Ceramics and Glass department at the University of  Sunderland. Her research translated the rose window into digital design as an experiment to create a 21st century interpretation of an ancient craft while using the web as a platform for a collaboration between a group of participating artists. 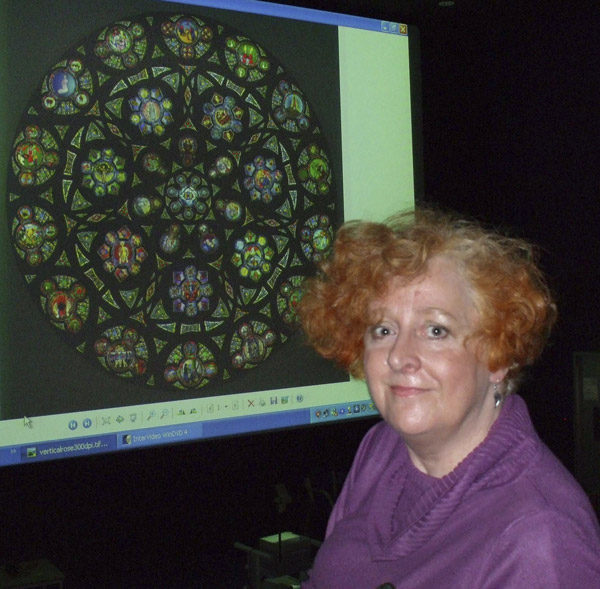 The rose window was divided into a structured template with 28 major figurative panels. The first stage created a website of historical background and context with examples and templates made up from the basic geometry. The second stage created a pilot project for artists to work online to make a finished image. The pilot project was designed to test the workshop spaces and the success of interaction and negotiation on-line. The workshop chats were monitored and analysed.  Participants were also asked for feedback about their experience of using the rooms and the resulting designs at the end of their session.

It was possible to emulate the grandeur and power of a medieval art as a projected image. The pilot project was completed in September 2006 by 17 artists working together and meeting regularly on line to discuss their designs. The artists applied their own choice of figures to the templates but needed to make sure these were compatible with those of the others. After discussion and agreement on line these were edited into the final product by Delia. This new ‘rose window’ produced a unique interpretation celebrating the diverse nature of being female in the 21st century by using the traditional stylisation of medieval glass to make digital facsimile stained glass panels.  It was projected large scale on screen in the New Media Cinema on the Sir Tom Cowie Campus at the University of Sunderland on International Women’s Day, March 9th 2008.  Delia was awarded her doctorate in December 2008.

The great rose windows of the Middle Ages were made without the aid of sophisticated tools in a time when art and craft were not separate fields. Collaboration was more important than personal expression through individual authorship; and content was supported by a central belief system. Even if we do not have the architectural spaces to contain such grand visions we can still create them by the use of digital graphics and modern technology.